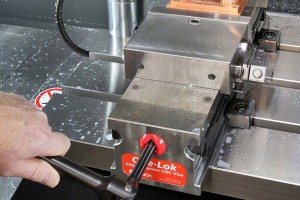 BNL (UK), a British manufacturer of plastic bearings and gears, has reduced machining lead-times in its prototyping department and toolroom following the purchase of a pair of ‘Chick One-Lok CNC vices.’

Purchased through UK agent, 1st Machine Tool Accessories (1st MTA), the workholding units, which arrived in August 2015, have replaced conventional wind-up vices on two Hurco machining centres at the Knaresborough factory in North Yorkshire. BNL says not only are workpieces secured faster, but repeatability and safety are also improved.

“With a conventional vice, the moveable jaw tends to ride up when a part is clamped, so you have to use a mallet to tap it down, then you usually have to tap the handle to make sure the part is fully secured,” explained BNL’s Toolroom Supervisor, Chris Hargraves.

“We machine up to 50 plastic components at a time here and it was a time-consuming process that is no longer required with the One-Loks.”

Hargraves explained that the controlled clamping action produces a pull-down effect as the jaws close, so components are always seated firmly after the handle is tightened by hand. Positioning of the components is also more precise, so machining is more consistent from batch to batch.

Choice of soft or hard jaws

Hard (steel) and soft (aluminium) quick-change Chick jaws with a special machined recess on the reverse are provided through 1st MTA for the Chick One-Lok workholding system.

Hard jaws, either plain or stepped, are used when rectangular workpieces are being clamped, such as when machining impressions in tool steel moulds, profiling copper electrodes and milling aluminium fixtures for product assembly.

Soft jaws come into their own when round or awkwardly shaped components such as injection moulded plastic parts are being machined, says 1st MTA. The jaws are milled to accommodate multiple such parts and as the shape matches perfectly, they are held securely and without damage. It is never necessary to over-tighten and job set-up for repeat batches is rapid, as the jaw sets are stored for re-use.

Soft jaws cannot be used on conventional vices, which presented BNL with a number of problems. If parts were round, only two could be clamped as a third would undoubtedly not be secure. There was also a risk of marking delicate surfaces.

Avoiding these drawbacks entailed laborious manufacture of a bespoke fixture or a profiled block that sat low in the vice for holding the parts. An alternative was to clamp the parts directly to the machine table, but this also took time.

Although the prototyping section and toolroom are not production environments, they are nevertheless busy. Some customers expect work to be turned around in two days, says BNL. Avoiding repeatedly losing time when fixturing components has been a major boost to productivity, says the company. Moreover, as the units are sealed against ingress of coolant and swarf, downtime for maintenance is rare.

On top of all these advantages is the speed with which the units can be closed to secure a component. It takes anything up to a minute to wind the handle of a normal vice up to 70 turns if the jaws are wide open and a small part is being clamped. By contrast, a ratchet system on the One-Lok allows the movable jaw to be positioned instantly to within a few millimetres of closure, after which the clamping action is completed with just a few turns of the removable swivel wrench.

We are committed to processing your data safely and securely.

For details on how we collect, store and process your data and your rights in respect of this, please see our Privacy Notice.